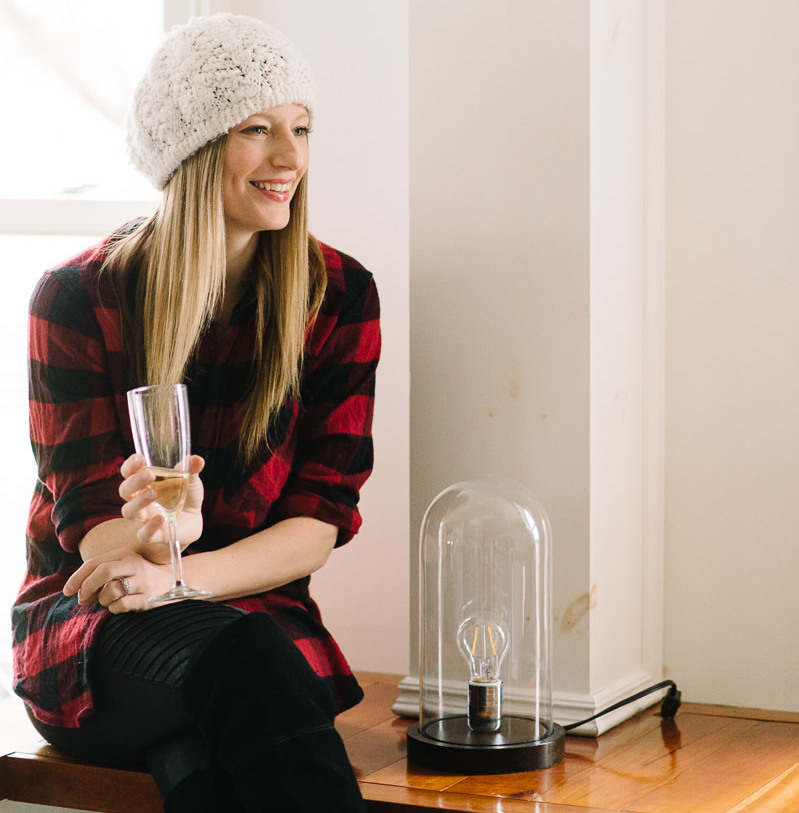 In the fall of 2018, interior designer Shannon Hunter bought a 1980s resort on West Lake in Prince Edward County expecting to renovate, rebrand and reopen the property by July of 2020. Covid delayed that timeline by seven months. Here’s what it was like to launch a resort during a pandemic.

—As told to Truc Nguyen

“I purchased my first property in Prince Edward County in 2015, primarily as a family cottage. We also rented it out on Airbnb, and over time it became more of a business. It went so well that within a few years, I’d bought four more houses to Airbnb with a business partner, Danny Edell. I was living and working in Toronto, and doing lots of commuting back-and-forth.

“In 2018, a spot called Sunrise Cottage Resort went on the market, and we were intrigued. In an average year, Danny and I were hosting 3,000 to 4,000 guests, so in a lot of ways we were already running a hotel. It was just spread out all over the County instead of in one place.

“Sunrise was on a four-and-a-half acre, L-shaped property with 500 feet of beachfront. The 10 baby-blue cabins, connected by roadways, had been renovated in the early 2000s and well-maintained since then. We weren’t dealing with a lot of rot or that type of thing, but it wasn’t what we wanted—it was cute and functional but not design-focused. The interiors had click-on vinyl floors and mismatched kitchen chairs. Also, the previous owners didn’t run it as a four-season resort, so it wasn’t built for winter.

“We put in an offer in the fall of 2018 and closed in April 2019. The following month, I effectively moved to P.E.C. for the summer, and ran Sunrise as-is, renting out the cabins for the busy season without making any changes. 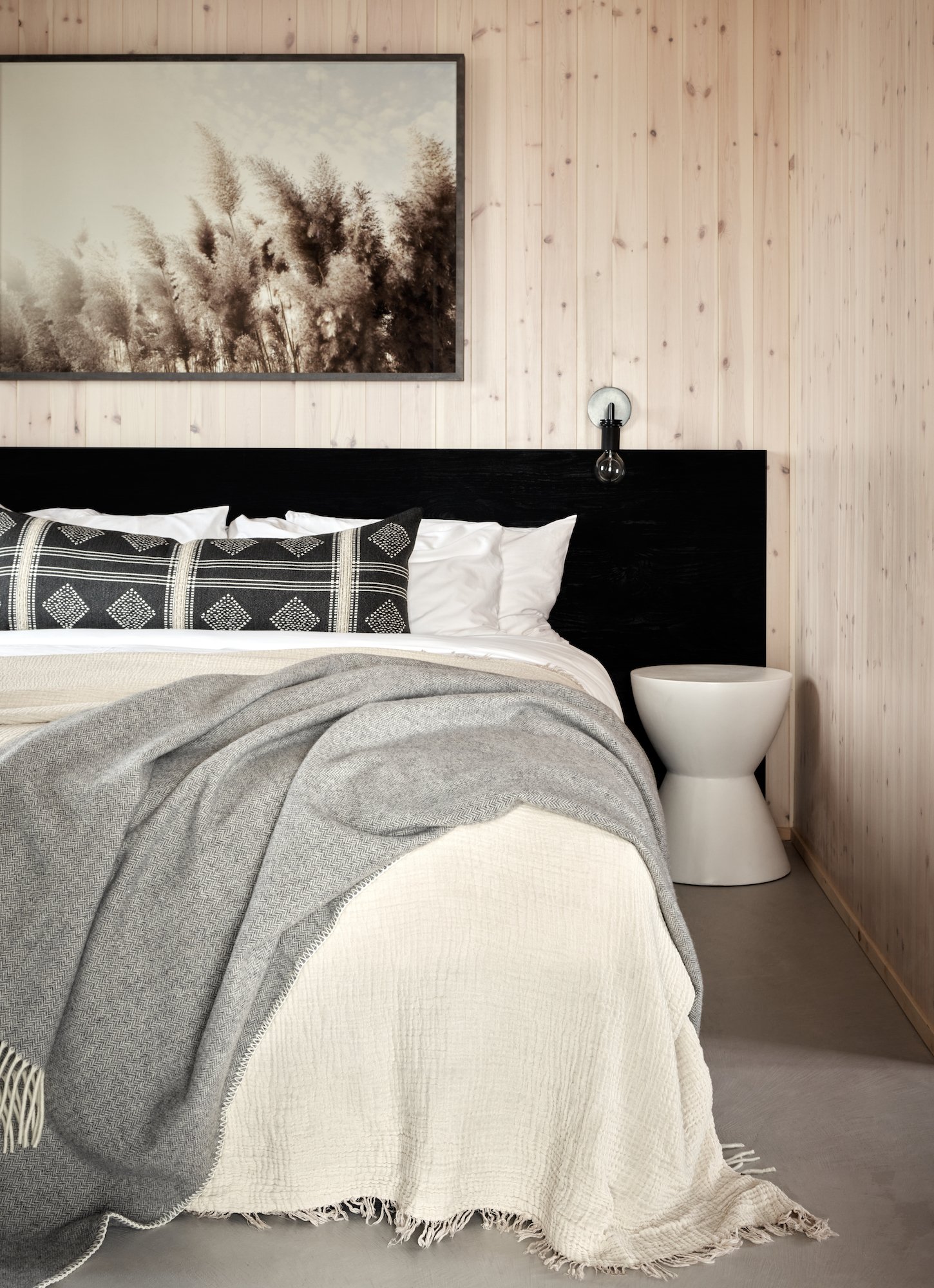 “After the summer season, Danny and I decided to change the name to Wander the Resort, inspired by our desire to build a place for guests with a wanderlust spirit. In the Before Times, when my husband and I went on road trips with our two kids, we would say, ‘Well, that was a nice trip but it wasn’t a vacation.’ We didn’t come back feeling any more rested than when we left because it was all about activities for the kids.

“At Wander, I wanted to create a place for summer camp-type experiences in an elevated, luxurious vacation setting. We would transform the cabins, expand the beach area, build a clubhouse, and add a recreational space with a hot tub, two pools and an elevated tanning ledge.

“We broke ground in October of 2019 and gutted the cabins. The only things that survived the renovation are the steel roofs, which we painted black. It probably would have been easier for us to just take them down and start over, but this way we could keep the existing septic system in place. Our lofty goal was to be open for July 2020.

“It was supposed to be an eight-month renovation, and then the pandemic hit. We were going pretty strong until all construction was shut down in March 2020. At that point, we had completely ripped the site apart. It wasn’t like we could just go back and run it as Sunrise for the summer. We had pulled the walls, the windows and all of the mechanical out. We had dug up the whole site to put in a new natural gas line and lower all the plumbing down 10 feet so that we could be open year-round. We just had a really expensive pile of dirt and not much else.

“When all the construction restrictions were lifted in June 2020, we got started full steam ahead again. A few months later, Danny and I sold off the Airbnbs to focus on Wander, and we finished major construction in mid-November. Then, it was just details like getting landscaping done and finishing roadways. We would have been able to open in December 2020 had the third lockdown not happened. Then we thought we were opening right after Christmas, and we were ready to go. Again, there was a lockdown. For about six months, we were in a perpetual opening phase, always on the cusp.

“We hired staff in preparation of the first opening in December, and we made the difficult decision to keep them on during the shutdowns. We continued to pay them as if we were at full-capacity. It was certainly very stressful carrying a full staff and not having any income. But we knew we would be in a much better position for the re-opening.

“The first day we hosted guests–all local and personally invited–was in February in eight of our cabins. We felt like we had finally righted the ship and were starting to run smoothly. That opening lasted six weeks until another shutdown in early April.

“It was heartbreaking, but there was an upside: it gave us time to figure out how to make Wander feel just as cozy and welcoming in the middle of February as it would in the summer. We added things like heated floors and indoor and outdoor fireplaces in every cabin. We also decided against TVs. It’s so nice when you walk around at night because everybody’s out on their decks—they’re sitting around the fire.

“All our bookings are online now and everybody does everything digitally, so there’s no in-person check-in. Your welcome drink is already in your fridge—you can pour yourself a glass of wine as soon as you arrive. Fifteen minutes later, we’ll be on your deck to tell you everything you need to know and answer any questions you might have about the resort.

“We’re hoping the pools, which were delayed by the latest stay-at-home order, will open in July. Right now we’re at the mercy of P.E.C. authorities for final inspections, and they’re under a backlog from being shut down for two months. For recreation, we’re offering tubing and wakeboarding lessons off our dock in partnership with a nearby school. We also have bikes that guests can take, which have been super popular. The bikes are out all day long, all the time. We’re right next to the Millennium Trail, so it’s really easy to get on and head to the wineries.

“The past 15 months have been nothing like we ever expected. We faced heartbreak and challenges, but at the same time, the pandemic helped us appreciate our communities and our own backyards. At Wander, we had a whole business plan that targeted the corporate market to fill cabins Monday through Thursday and in the off-season. But it’s been unnecessary; we are booked solid all the way to December.”