It didn’t take long for the self-isolation rules to prove difficult for NBA players. Toronto Raptors big man Chris Boucher was spotted at a downtown Toronto Loblaws on Thursday, just one day after he and his teammates were ordered into self-isolation to prevent any potential spread of the coronavirus.

The Raptors were one of the five teams told to self-isolate for 14 days after playing the Utah Jazz on March 9, only two days before Utah Jazz center Rudy Gobert became the first NBA player to test positive for COVID-19 on Wednesday, which triggered the indefinite suspension of the 2019-20 NBA season.

A photo was sent to CityNews showing Boucher at the Loblaws downtown location on Thursday evening, wearing gloves, but no mask. 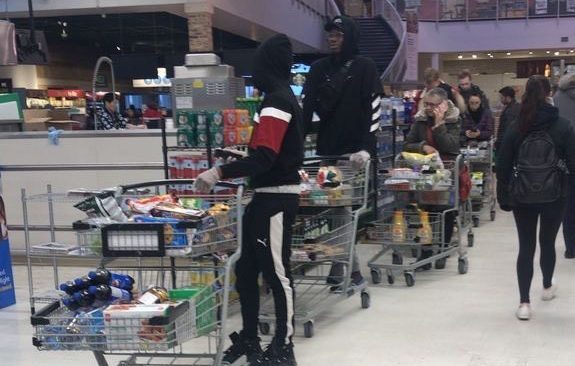 The Raptors acknowledged it was indeed Boucher, but noted he was asymptomatic since his return to Toronto and has since tested negative for COVID-19, like the rest of his teammates.

“He has been told to self-monitor for any symptoms. However, he broke protocol. He is extremely regretful,” a statement from the Raptors read.

The Raptors, the Jazz, and the Oklahoma City Thunder were three of the few NBA teams that were tested for COVID-19 from top to bottom. Gobert and teammate Donovan Mitchell tested positive and Detroit Pistons big man Christian Wood, who was having a breakout stretch in March, also contracted the virus.

Awkwardly enough, Boucher, like many other NBA players, needs to replenish the fridge — and there is no Uber Eats or DoorDash that can haul the amount of items he was carrying in that shopping cart.

Toronto Raptors to allow up to 3,500 fans at games in Tampa beginning March 19