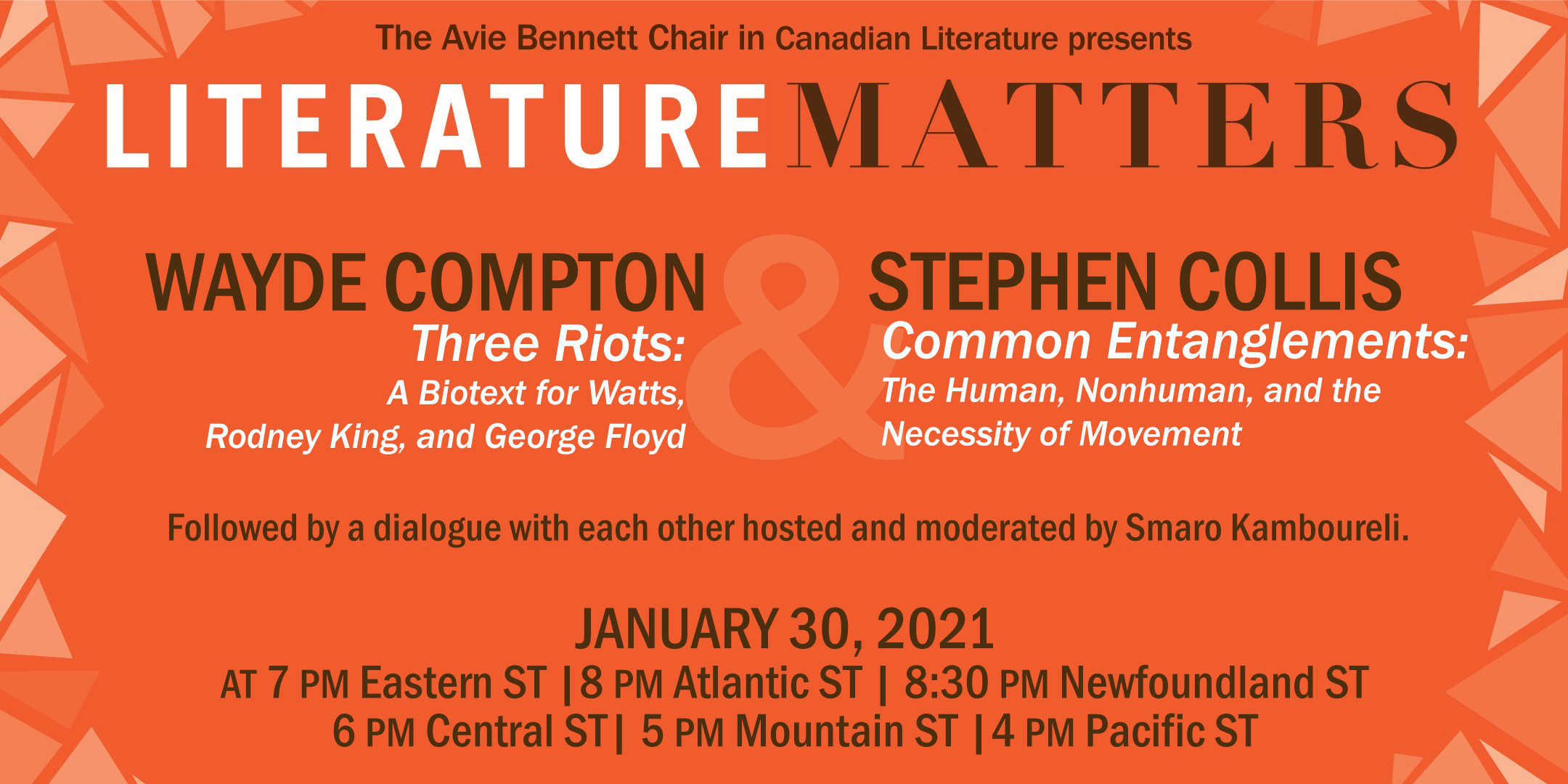 Wayde Compton has been lauded as one of “the most brilliant and accomplished black writers of his generation.” He has published two poetry collections, 49th Parallel Psalm (1999), a finalist for the Dorothy Livesay Poetry Prize, and Performance Bond (2004), as well as a short fiction collection, The Outer Harbour: Stories (2014), which won the City of Vancouver Book Award in 2015. His young adult graphic novel, The Blue Road: A Fable of Migration, illustrated by April dela Noche Milne (2019), has been praised as a “touching allegory of the unexpected and burdensome trials of migration” in a starred Kirkus review. The editor of two anthologies, Bluesprint: Black British Columbian Literature and Orature (2001) and (with Renee Sarojini Saklikar) The Revolving City: 51 Poems and the Stories Behind Them (2015), he is also a co-founder (along with David Chariandy and Karina Vernon) of Commodore Books, western Canada’s first Black Canadian literary press. His non-fiction book, After Canaan: Essays on Race, Writing, and Region (2011), was a finalist for the City of Vancouver Book Award. Compton has been writer-in-residence at Simon Fraser University, Green College at the University of British Columbia, and the Vancouver Public Library. From 2012-18, he administered the Creative Writing Program in Continuing Studies at SFU, including the award-winning Writer’s Studio. Compton teaches in the faculty of Creative Writing at Douglas College.

Stephen Collis is the author of a dozen books of poetry and prose, including the poetry collections Anarchive (2005), a finalist for the Dorothy Livesay Poetry Prize, The Commons (2008, 2014), On the Material (2010), winner of the Dorothy Livesay Poetry Prize, To the Barricades (2013), and Once in Blockadia (2016), which was nominated for the George Ryga Award for Social Awareness in Literature. An activist and social critic, his writing on the Occupied movement is collected in Dispatches from the Occupation (2012). His other prose works include Phyllis Webb and the Common Good (2007) and his memoir Almost Islands: Phyllis Webb and the Pursuit of the Unwritten (2018). Collis lives near Vancouver, on unceded Coast Salish Territory, and teaches poetry and poetics at Simon Fraser University. In 2019 he was awarded the prestigious Latner Writers’ Trust of Canada Poetry Prize, an award given to “a mid-career poet in recognition of a remarkable body of work, and in anticipation of future contributions to Canadian poetry.” In 2021 Talonbooks will publish A History of the Theories of Rain.

Smaro Kamboureli is the Avie Bennett Chair in Canadian Literature at the University of Toronto. Her most recent publications include her introduction to the University of Toronto Quarterly special issue she co-edited, “Literary Solidarities: ‘Should I be here?’,” her article “Diaspora” in Oxford Research Encyclopedia of Literature, and a bilingual English / Italian edition of her poetry book, in the second person, in seconda persona. She is the author of Scandalous Bodies: Diasporic Literature in English Canada, winner of the Gabrielle Roy Prize for Canadian Literary Criticism, and On the Edge of Genre: The Contemporary Canadian Long Poem. The editor of two editions of the anthology Making a Difference: Canadian Multicultural Literatures, she has edited and co-edited over twenty books, including Lee Maracle’s Memory Serves: Oratories (2015).

Registrants will receive the webinar Zoom link via email.