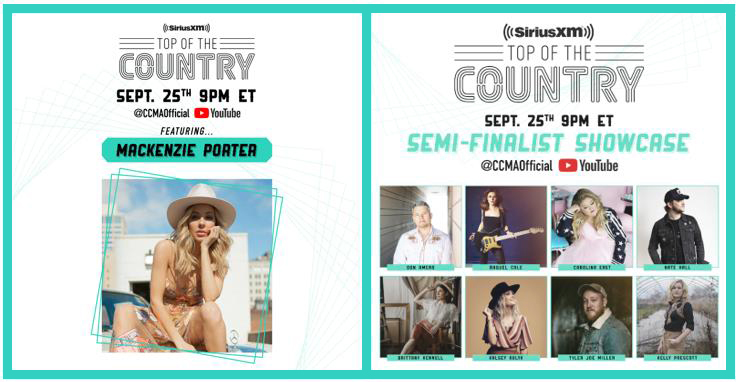 Each contestant will play one live song, marking their first ever appearance as part of the two-year competition, which ramps up in early 2021. The semi-finalists are available for interview upon request. All Canadians can access this evening of foot stomping Canadian country music for free through the CCMA YouTube channel.

Who:
Hosted by: SiriusXM’s Jeff Leake, Director of Music Programming

What: SiriusXM’s Top of the Country Showcase, an evening in celebration of Canada’s brightest country music up-and-comers. Each semi-finalist will take the stage to perform one of their most defining songs, before MacKenzie Porter closes the night with two of her #1 charting hits and a new track from her upcoming album.

Singer-songwriter MacKenzie Porter is a rising Country talent whose sound knows no borders. Signed to Big Loud Records, Porter is surging now with an arsenal of new music produced by Joey Moi (Jake Owen, Morgan Wallen). Since moving to Nashville in 2014 from her native Canada, she’s developed a radiant Country style which threads the needle between traditional heart and modern energy, often collaborating with songwriting mainstays like Nicolle Galyon, Craig Wiseman, Natalie Hemby, and Tommy English. Her “mesmerizing vocals and hook-driven songs” (Billboard) have sparked a list of headline-worthy accolades, including multiple Canadian Country Music Award nominations —  4X Female Artist of the Year, Songwriter of the Year and Fans’ Choice — as well as a previous JUNO Award nomination for Country Album of the Year. Making her mark, Porter became the first female artist to have three back-to-back #1 singles at Canadian Country radio in 22 years with “About You,” “These Days” and “Seeing Other People” in early 2020, following Shania Twain in 1998. Porter also earned her first crossover Top 10 at Canadian pop-radio — a first since 2003 for a Canadian female country artist — with “These Days (Remix).” She’s toured extensively on her own, sharing the stage with Kenny Chesney, Rascal Flatts, Chris Lane, Blake Shelton and Dallas Smith, and also co-starred in the Netflix series, “Travelers.”

SiriusXM radios and accessories are available from retailers nationwide and online at SiriusXM. In addition, SiriusXM Music for Business provides ad-free music to a variety of businesses. SiriusXM is also a leading provider of connected vehicles services, giving customers access to a suite of safety, security, and convenience services including automatic crash notification, stolen vehicle recovery assistance, enhanced roadside assistance and turn-by-turn navigation.

SiriusXM Canada has been designated one of Canada’s Best Managed Companies 11 years in a row and is currently a Platinum Club Member.

Established in 1976, the CCMA is a membership-based, not-for-profit organization committed to the promotion and recognition of Canadian country music. Built upon the foundation to educate, elevate and celebrate Canadian talent, the CCMA progressively heralds the spirit, community and creativity that country music fosters through year-round initiatives, culminating every fall with Country Music Week and the Canadian Country Music Association Awards. Sponsors of Country Music Week and the 2020 CCMA Awards Show include FACTOR, Canada’s Private Radio Broadcasters and the Government of Canada through the Department of Canadian Heritage’s “Canada Music Fund”, Radio Starmaker and the Government of Ontario.

A Toronto couple wanted a place to quarantine. They found this $950,000 Muskoka cottage