Nav Bhatia has returned to his natural place: sitting a basketball game, cheering loudly and proudly.

Bhatia, the world-famous “Superfan,” arrived in British Columbia this week to take in the sights and sounds of the province.

Although, he’s sitting a little further away than his usual courtside seats at this week’s Olympic qualifying tournament in Victoria, which has limited fan sections due to COVID-19 restrictions within BC.

Bhatia has become known around the globe for his courtside presence at every Toronto Raptors home game since they were established in 1995. But with the Raptors playing in the Orlando bubble to end the 2020 season and relocating to Tampa for 2020-21, Bhatia hadn’t seen a live basketball game in over 15 months.

“Ok [Victoria, BC], the Superfan has landed. Out and about today spreading the beautiful game of basketball and getting the city and Canada excited to cheer on our [Canadian men’s basketball team],” Bhatia posted.

Canada won their opening game of the tournament by a 97-91 score over Greece. They’ll be taking on China at 7 pm ET/4 pm PT today. A win in that contest would guarantee them a berth in Saturday’s semifinal.

“I can’t tell you what it felt like being back in the arena to watch basketball,” Bhatia said in his postgame post. “Congrats to the team and a big shoutout to Greece Basketball, who kept it close the entire way.”

The tournament wraps up this Sunday, with Canada needing to come out on top of the six-team field to qualify for next month’s Tokyo Olympic Games. While fans aren’t permitted at games in Victoria until July 1, Bhatia has an official role with Canada Basketball as a Global Ambassador.

It seems like Bhatia was having a blast with Arkells frontman Max Kerman, who is also in town for the tournament, as the pair played some pickup games with Victoria locals. 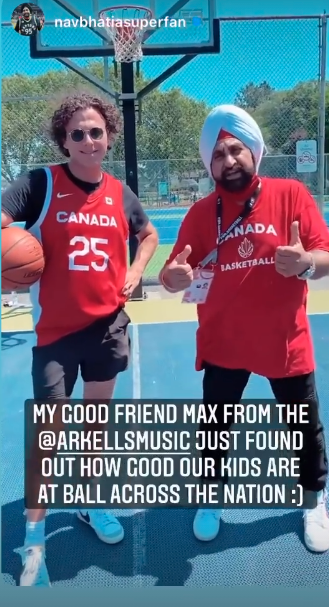 Though Bhatia was forced to watch from home this year as the Raptors played the entirety of their season in the United States, it seems hopeful that he’ll be able to back at Scotiabank Arena soon enough.

Is Masai Ujiri indirectly calling the shots for Raptors?