The NBA is facing backlash for resuming the league amid the ongoing protests in the country. While the league is only going to resume by July 31, players feel it would create a huge distraction among the people. The league and almost every team which is a part of it, had voiced their support to the Black Lives Matter movement. But, the New York Knicks faced heavy criticism for choosing to remain silent on the matter.

Knicks owner James Dolan was slammed by the media for his actions. But just months before, the Knicks had the only African-American general manager and president combo in the NBA. Keeping all that aside, the Knicks have had a troublesome season so far. They rank 12th in the East, and won’t be completing their regular season in Orlando.

Holding a 21-45 record, the team has endured a poor run which was put to a halt by the NBA’s suspension. As their title run is now over, the team can prepare for the upcoming season with full flow. The team needs a major boost in their squad and there are already rumors flying in about who they might sign.

The Knicks have to take a few drastic steps if they aim at improving further. The team needs a person who can hold the court and dominate play on either side. The two-time champs boast a young and fearless side. But they have been unable to achieve glory with what they possess.

Thus, it might be time for them to shop from their rivals, according to Bleacher Report’s Mike Chiari. He listed the names of a few players who might boost the Knicks with their arrival. “As far as free-agent centers go, both Marc Gasol and Kelly Olynyk could provide what the Knicks are looking for. The 35-year-old Gasol is a one-time NBA Defensive Player of the Year and making 1.4 three-pointers per game this season and connecting on 40.2 percent of his attempts from beyond the arc.” 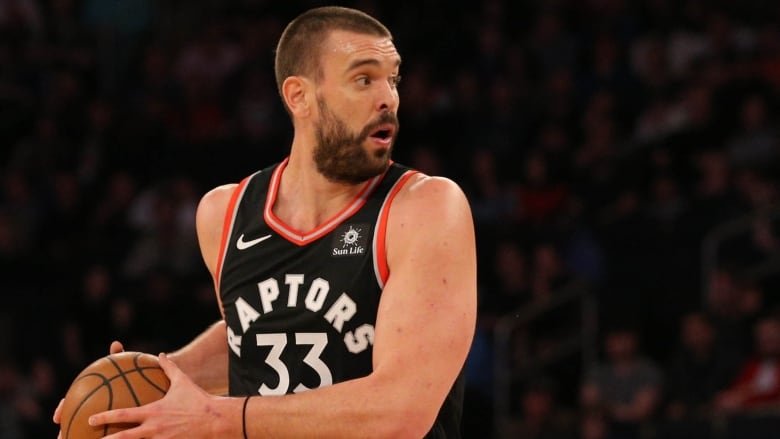 Marc Gasol who has reportedly lost weight during the quarantine period will be the #1 target for the New York Knicks, according to Chiari. Moreover, the BR writer does not expect the Knicks to end their search there. The team might require a power forward to elevate their scoring rates.

“New York could also explore the power forward market with Serge Ibaka and Frank Kaminsky standing out above the rest of the pack,” Chiari wrote. “Like his Toronto Raptors teammate in Gasol, Ibaka has shot the ball spectacularly this season. He is averaging a career-high 16.0 points per game, and his three-point shooting percentage of 39.8 percent is a career-best mark as well.”

Gasol and Ibaka are defending champions and possess a good playing chemistry between them. The duo presented the Toronto Raptors with their maiden title last year. Should the New York Knicks go after Gasol and Ibaka to boost their roster for the 2020-21 season?