Kyle Lowry wound up staying with Toronto after all. Victor Oladipo is finally in Miami, a destination he’s eyed in the past. And Rajon Rondo is headed back to Los Angeles, though not with the team he helped win the NBA title last season.

The trade deadline has come and gone. And now, playoff pushes can really begin.

Miami, Denver, the Clippers, Portland, Dallas, Boston and Atlanta were likely among the teams feeling convinced that they improved on deadline day after a flurry of moves Thursday, though the best player — at least this season — might have been landed by the Chicago Bulls. They got All-Star forward Nikola Vucevic from Orlando, a move that ushered in the start of a big-time rebuild by the Magic.

“Anytime you trade a player like Nikola, it is a tough decision to make,” Magic President Jeff Weltman said.

The Bulls also parted ways with former University of Arkansas player Daniel Gafford (El Dorado) and Chandler Hutchison, sending them to the Washington Wizards in exchange for Troy Brown Jr. and Morwitz Wagner. In 31 games this season, Gafford has averaged 4.7 points and 3.3 rebounds a game.

The Magic traded three of their four leading scorers; in addition to the Vucevic move, Evan Fournier was sent to Boston and Aaron Gordon is headed to Denver. Acquiring Gordon was part of a bold day for the Nuggets, who also got JaVale McGee — part of three of the last four NBA championship teams, two with Golden State and last year with the Lakers — through a trade with Cleveland.

And Toronto made one move of significance, sending Norman Powell to the Portland Trail Blazers for Rodney Hood and Gary Trent Jr. But Lowry — a free-agent-to-be and considered perhaps the biggest prize on this year’s trade market — did not get traded, the Raptors apparently unable to find enough assets to their liking.

Miami was a major pursuer for Lowry, and now simply may try to add him again as a free agent later this year. But the reigning Eastern Conference champions pivoted in time to add Oladipo — a two-time All-Star, a 21-point-per-game scorer this season and someone only three years removed from All-NBA status — from Houston, in exchange for Kelly Olynyk, Avery Bradley and a pick swap in 2022.

“The actual day, there’s usually a lot more hype and then a lot less action than what is speculated,” Heat Coach Erik Spoelstra said. “That was probably true this year as well.”

Questions swirled around Lowry all the way to the 2 p.m. CST deadline, and there were signs that the Raptors were positioning themselves to make the move. Toronto traded Matt Thomas to Utah and Terence Davis to Sacramento for future draft picks, not long before the deadline to open up roster spots — necessary because anyone who obtained Lowry would have had to send multiple players to Toronto in order to make the salary ramifications work.

In the end, though, the Raptors couldn’t be swayed to part with Lowry. So, on his 35th birthday, Lowry woke up as a Raptor — and remained one.

The Clippers — who sought point guard help for weeks — got it in Rondo, who was part of the Los Angeles Lakers’ run to the title last season and now returns to L.A. The Clippers gave up Lou Williams in that deal with Atlanta, sending him back to his home state and the team with whom he spent two seasons from 2012 through 2014.

Another veteran joined a Western Conference contender when New Orleans sent JJ Redick to the Dallas Mavericks, along with Nicolo Melli for Wes Iwundu, James Johnson and a second-round pick in this summer’s draft. Redick satisfies Dallas’ want for more shooting and provides a veteran voice to help younger players — just as JJ Barea did for Dallas in past seasons.

The Heat made another deal prior to the Oladipo one being struck, landing Nemanja Bjelica from Sacramento for little-used forwards Maurice Harkless and Chris Silva.

The deadline passed without moves getting made for San Antonio’s LaMarcus Aldridge and Cleveland’s Andre Drummond, a pair of veteran post players who have not been on the court for their current — and soon to be former — clubs in several weeks, after decisions were made in both cases for the sides to move on amicably. Aldridge’s buyout was finalized Thursday afternoon and the Cavaliers were working toward one with Drummond; those moves will make them free to sign with the club of their choosing. 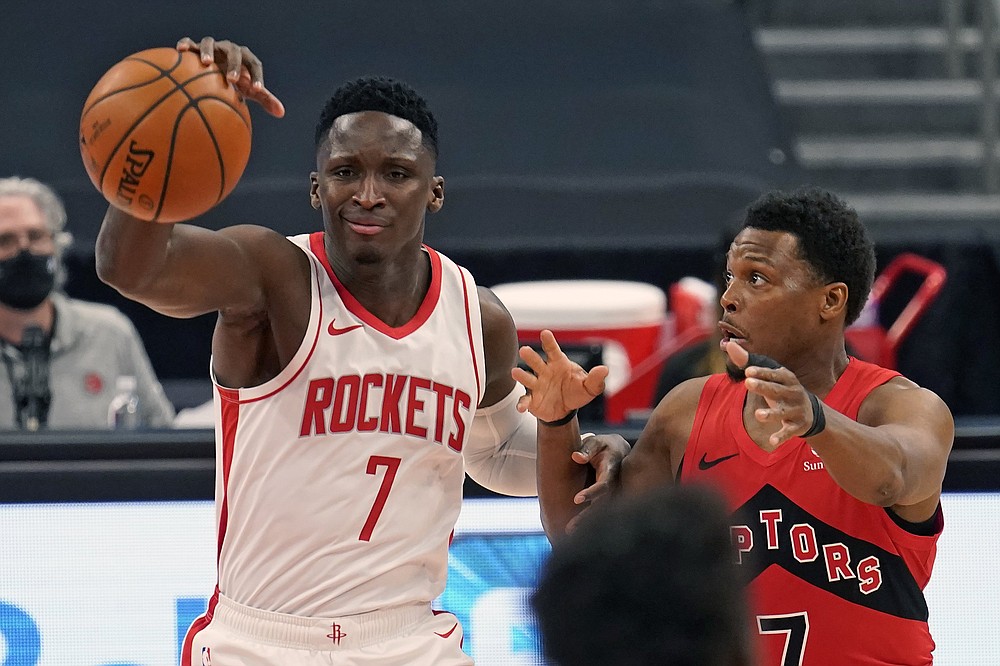 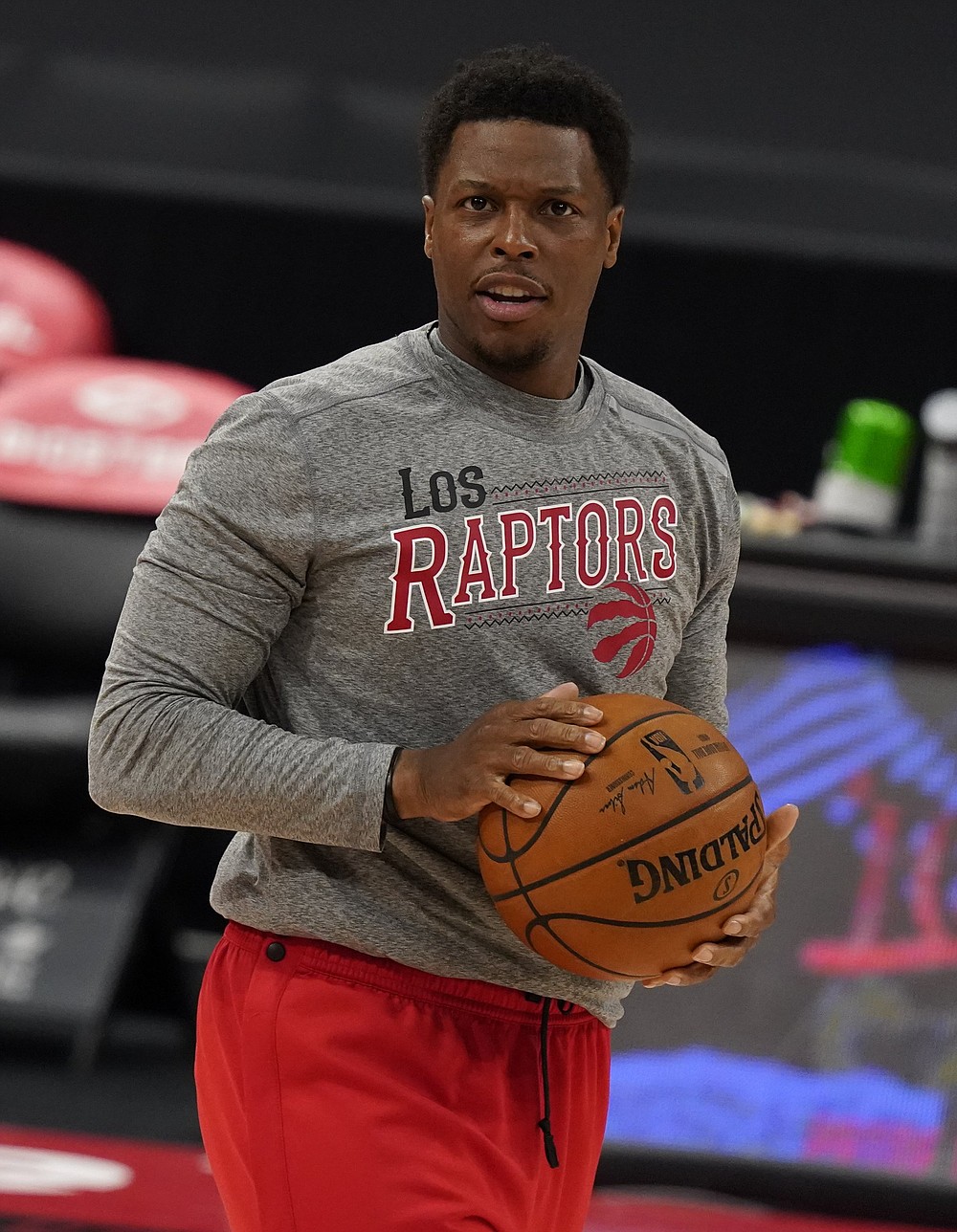 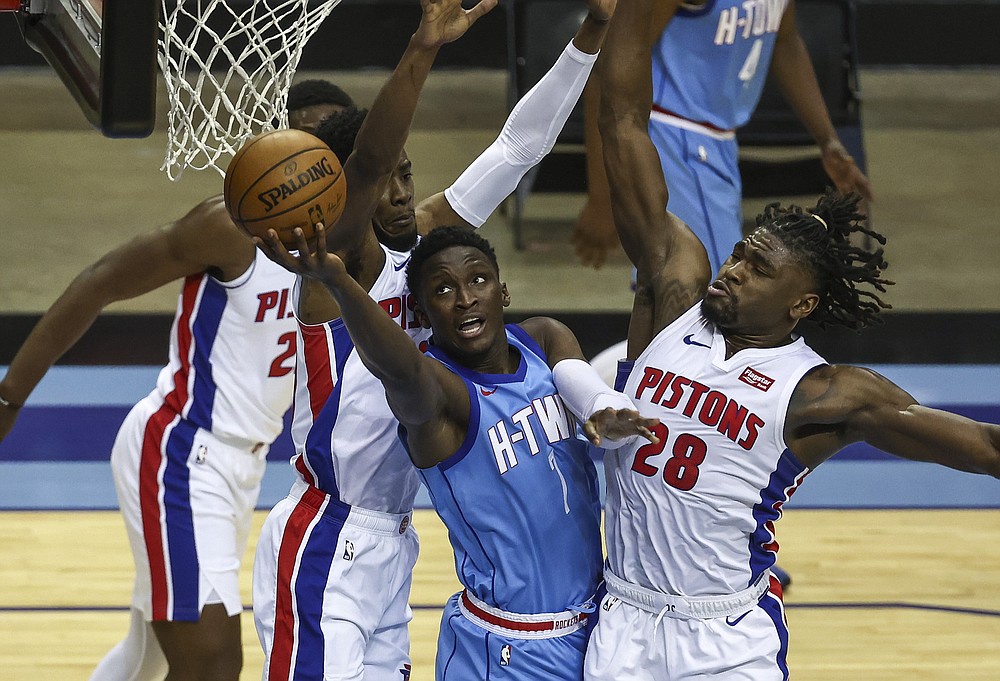 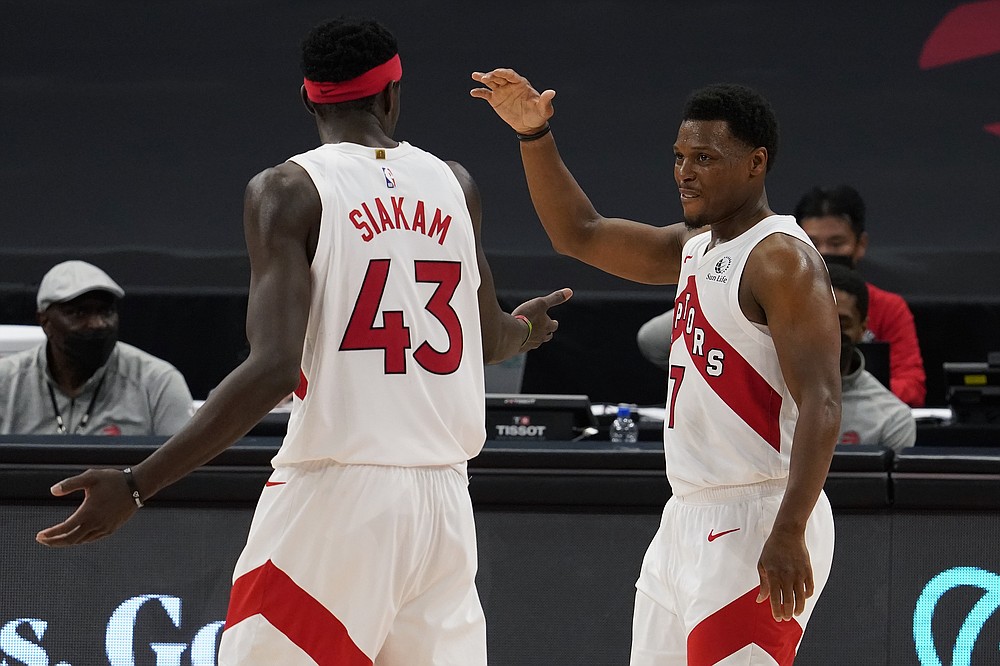 Toronto Raptors guard Kyle Lowry (7) celebrates with forward Pascal Siakam (43) as the pair is taken out of the game against the Denver Nuggets during the second half of an NBA basketball game Wednesday, March 24, 2021, in Tampa, Fla. (AP Photo/Chris O’Meara) 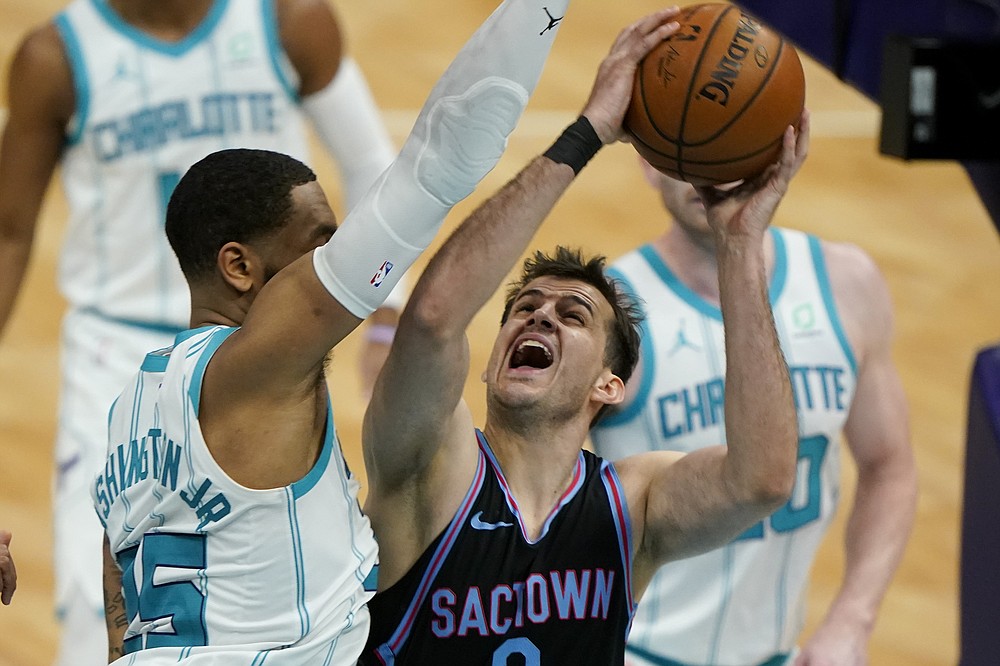 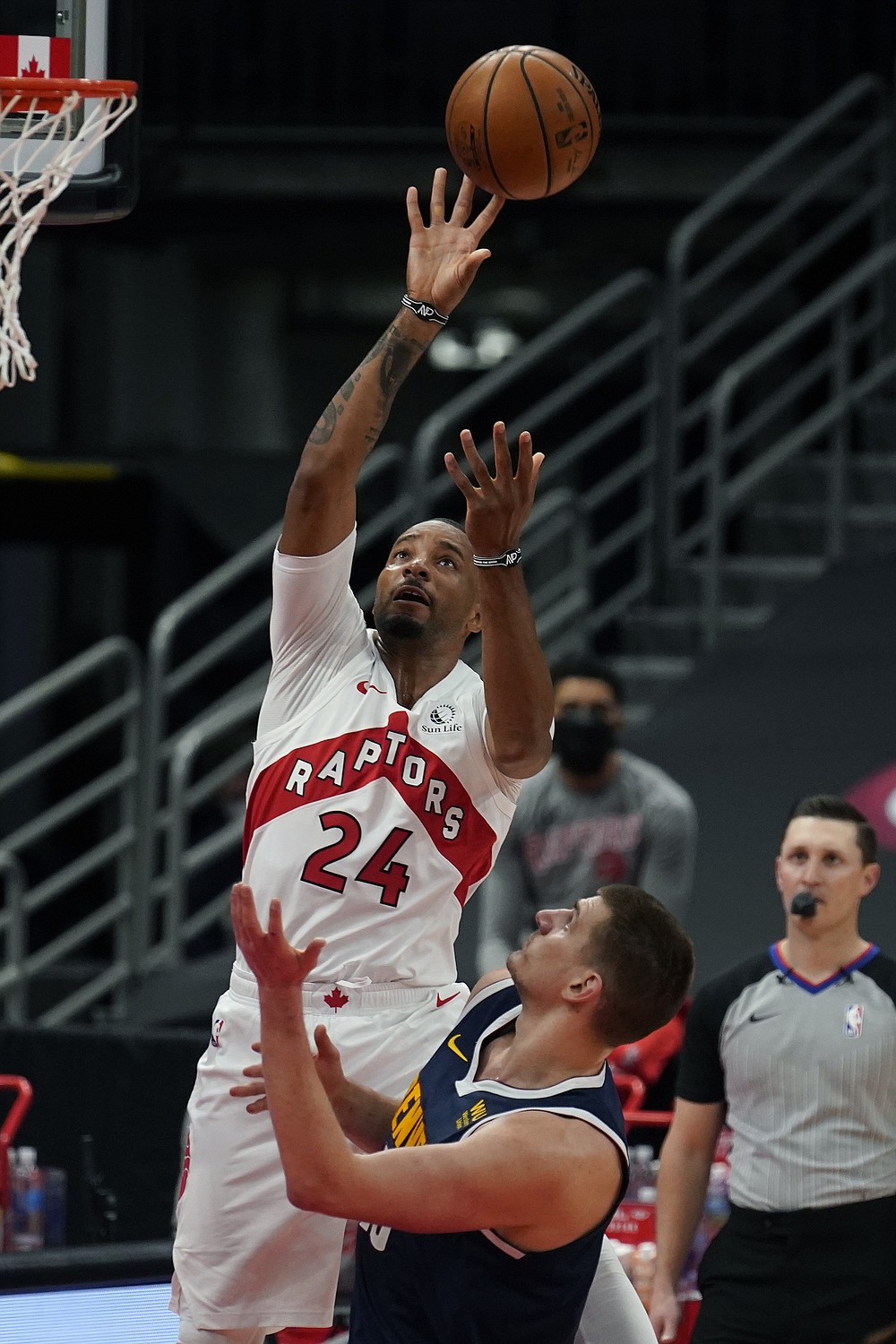