During Game 5 of the NBA Finals against the Toronto Raptors, Kevin Durant fell to the floor holding his right leg. He tore his Achilles tendon and had to leave the arena in crutches later. It’s almost been a year now but KD still isn’t ready for a return any time soon. 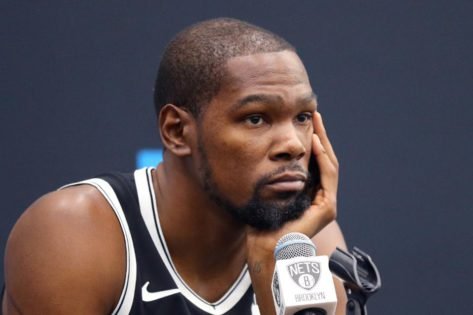 Since then Durant has moved on from the Warriors, signing a five-year, $221 million max deal with the Brooklyn Nets in the off-season. The Nets also signed Kyrie Irving on a four-year, $141 million deal. This pairing plus talented players like Spencer Dinwiddie, Jarrett Allen, and Caris Levert have the potential to go all the way. But that will not happen this season as Durant has stated he won’t feature anytime soon.

When Marc Spears asked what he misses the most about the game right now, Durant replied, “I miss preparing for games. My teammates. I’m looking forward to playing in front of the Barclays [Center] crowd for the first time. I miss the locker room a lot and that camaraderie.”

Despite not playing any games, KD has been sitting with the bench during the games. Since the last season, the Nets bench has gained a reputation for their dancing and camaraderie. Durant has also occasionally participated in this new tradition of the Nets.

A player like Durant always influences the locker room. During the Finals against Toronto, his former Warriors teammate Shaun Livingston said it “killed” KD that he couldn’t play. “He’s been very vocal in here,” Livingston told ESPN. “At halftime, he was having a one-on-one talk with Stephen [Curry]. Giving him what he sees, his perspective. After the game, he was speaking up amongst the team. He had the floor.”

The Nets were hoping to see Durant return by the Playoffs but that has not gone according to plan. To make matters worse, Irving has also said he will miss the Playoffs. With both of their leaders out, the responsibility will fall on Spencer Dinwiddie, who has already shown that he can thrive without Irving.