Growing up, she lived across from a haunted house. She bought it during the pandemic for $840,000 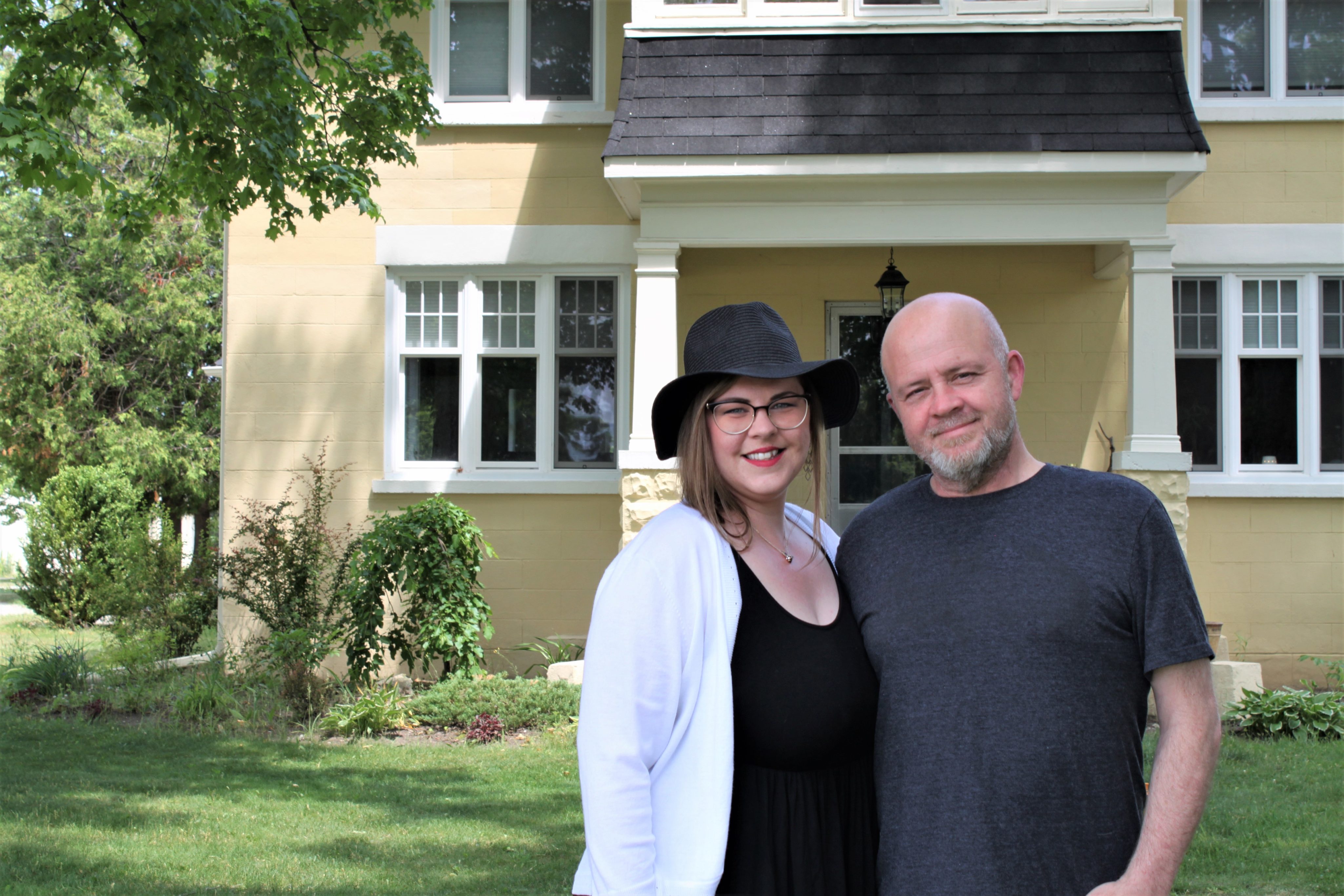 The history: Melissa grew up in Angus, Ontario, a small town a 20-minute drive west of Barrie. She lived across the street from a spooky old house that had been unoccupied since the 1960s.

According to local folklore, the place was haunted. On Halloween, the lights in the attic were mysteriously always turned on, causing people in the neighbourhood to wonder whether a paranormal force had flipped the switch. Melissa even wrote childhood stories about a ghost who lived in the house.

Melissa eventually moved to Toronto. In 2009, she bought a two-bed, one-and-a-half-bath condo near Eglinton West station for $175,000.

A few years later, in 2012, she met Paul while they were both working at Indigo in Yorkdale Mall, but they only started dating after Melissa found a job elsewhere, in 2014. Paul often stayed with Melissa at her condo, since it was so close to Yorkdale Mall, where he continued to work. They got married in 2016.

In 2019, they decided to do about $90,000 worth of renovations, putting in an open-concept kitchen, redoing the bathroom and installing new doors and laminate flooring. They even put in a custom-made nook at the end of the kitchen island, with food and water bowls for their dog, Oakley.

When Covid hit, the couple switched to working from home. At the time, Paul was the customer service manager at Ikea in Vaughan, and Melissa was working as a national account manager for Timex in Markham.

Paul went back to work a few months later when curbside shopping started. The couple were enjoying their newly renovated condo and had no intention of going elsewhere.

In mid-November, Melissa’s mother, who still lives in Angus, sent the couple a listing for a six-bedroom, two-bathroom house for sale. The listing was posted on Friday, November 13, which was quite eerie, considering it was the haunted house from Melissa’s childhood. Her mother knew the couple loved history and looking at old houses, so she thought they might find it interesting.

Having grown up across from the house, Melissa was eager to see what it looked like inside. So, out of curiosity, the couple booked a showing for the next day.

The hunt: The house had a charming yellow-brick exterior with a small front porch. It sat on an acre of land on a quiet street, with a river running behind the property.

Melissa and Paul thought the place would have “creepy vibes” given its reputation, but they actually found it delightful. They liked the classic details of the interior, like dark wood trim around the doorways and along the baseboards, creaky hardwood flooring and antique doors with old key locks. 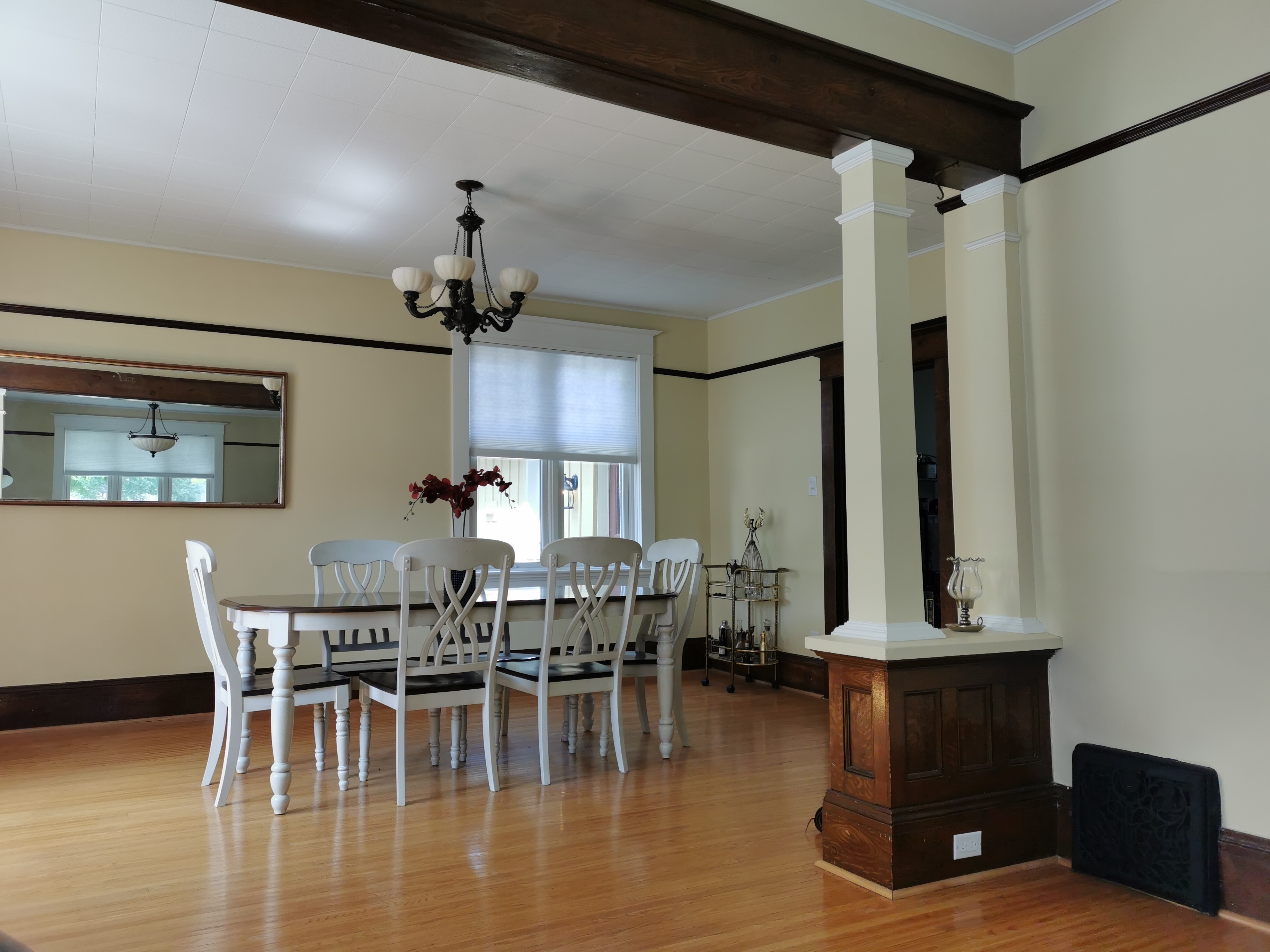 The kitchen had a functioning Frigidaire wall oven from the 1960s: 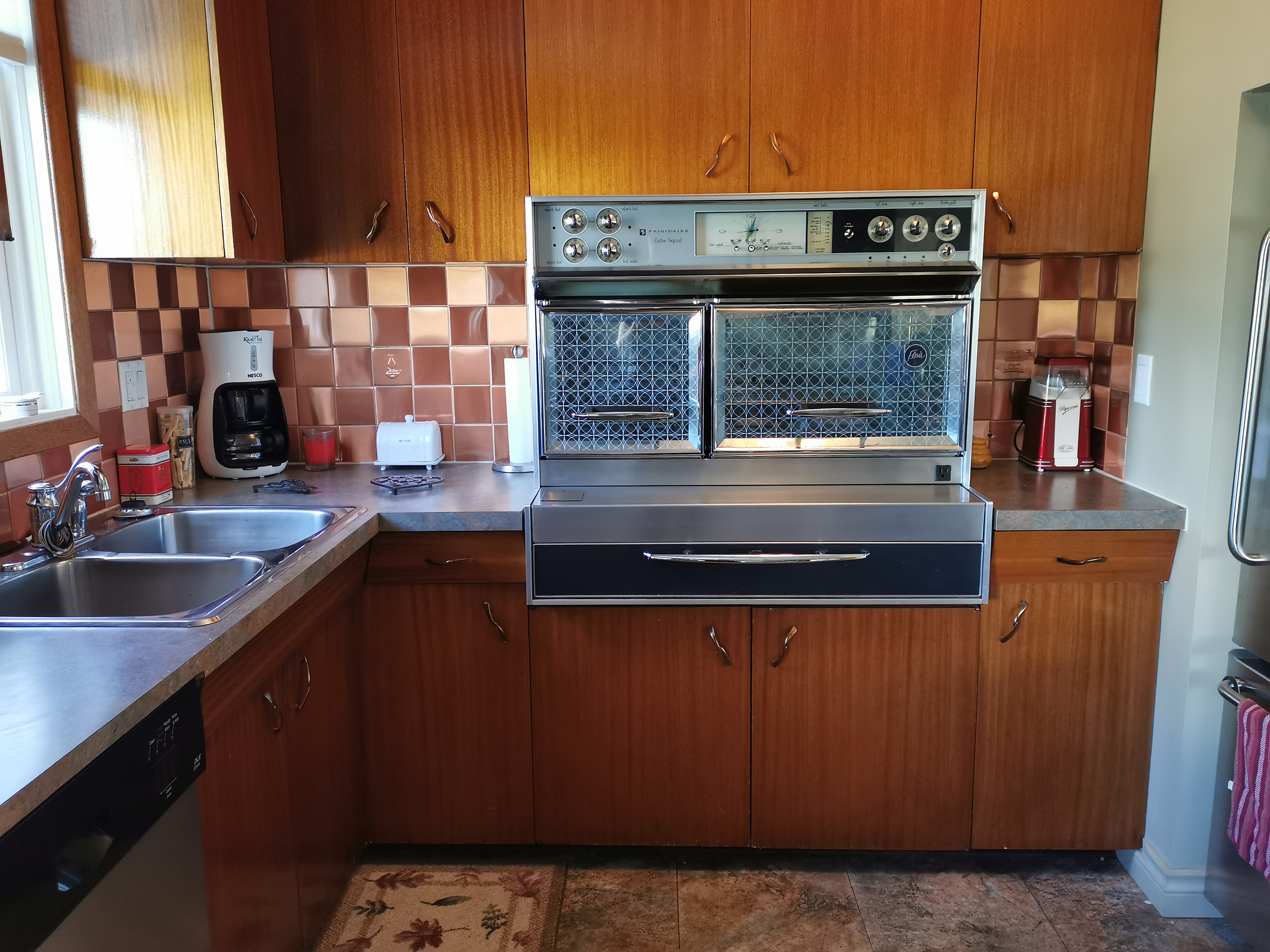 Here’s the upper foyer (editor’s note: we were unable to confirm whether the beam of light in front of the doorway was, indeed, a ghost): 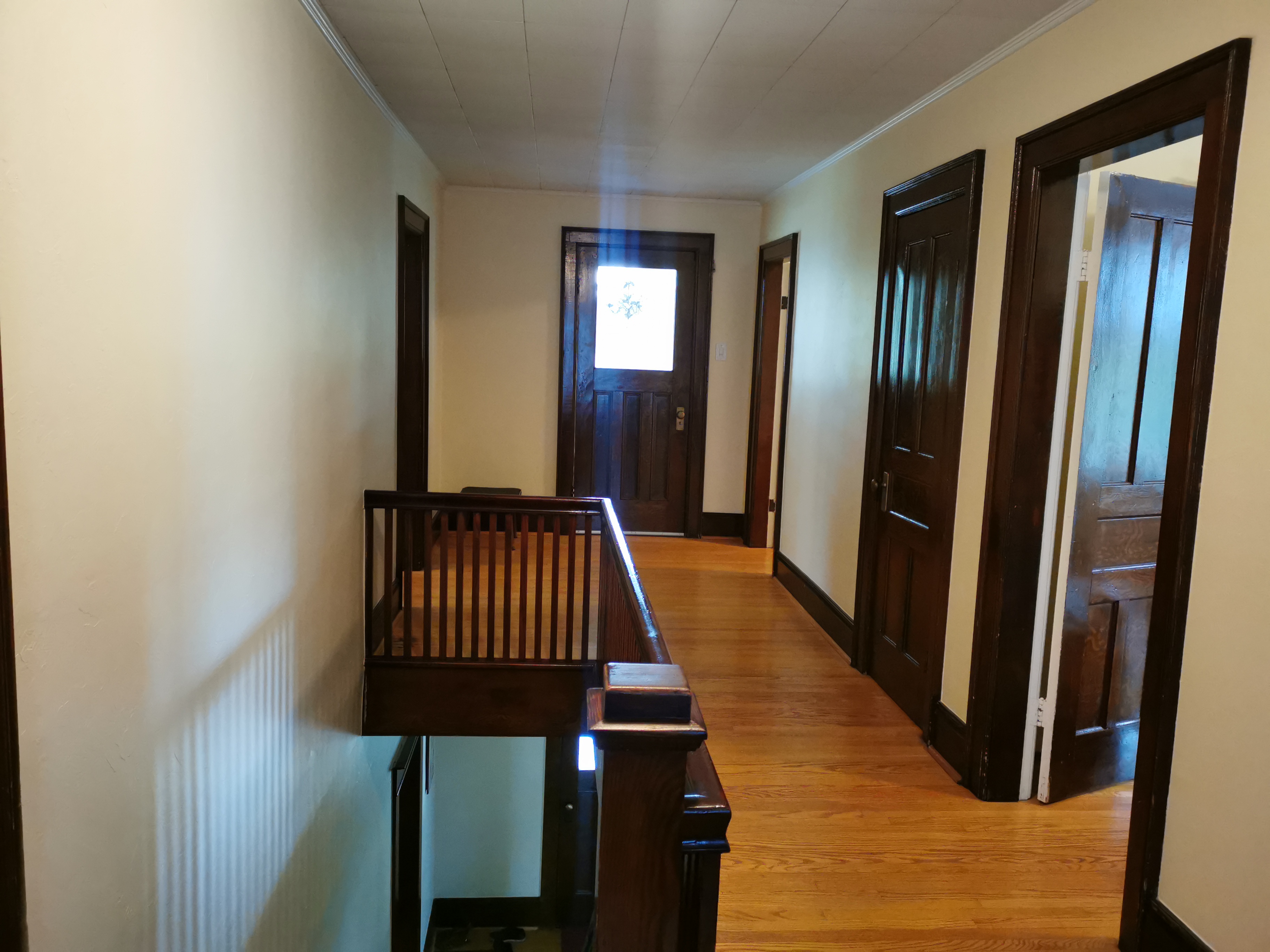 There are five bedrooms, a full bathroom and a sunroom on the upper level:

The attic had been partly renovated. It’s 15 feet high at its peak, making it potentially livable, with a few renovations. (Melissa and Paul didn’t see any spectres up there.)

Over the past few years, parts of the home, like the second-floor bathroom, some of the windows, the roof and the sewer line, had been upgraded by the current owners. The sellers’ grandparents last lived there in the 1960s. 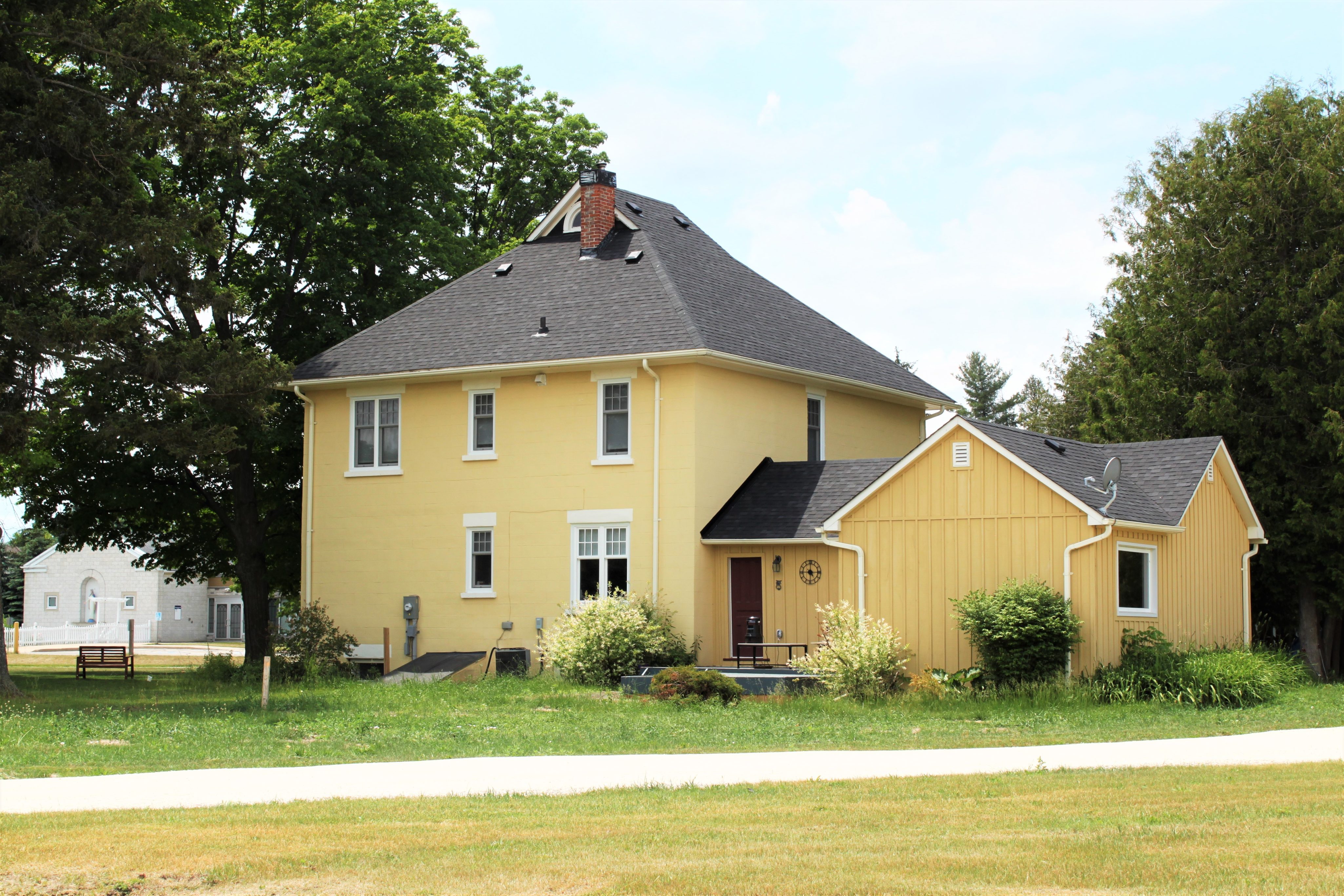 During the viewing, the owners admitted that they used to turn the lights on in the otherwise vacant house on Halloween, knowing people thought the place was haunted.

The couple loved the house so much they started to seriously consider buying it. Melissa’s parents’ house was a two-minute walk away, and her sister lived nearby too.

They would have a longer commute to work—a 50-minute drive for Paul and just over an hour for Melissa—but it was doable. Plus, Melissa would be staying on a hybrid work model for the foreseeable future, so she’d only need to be in the office a few days a week. Paul had co-workers in Barrie and Collingwood he could carpool with to Ikea.

The house was listed for $875,000. The couple didn’t think they could afford it, but they tried crunching the numbers with a financial advisor. Their condo had increased in value over the years, and even more considering their recent renovation.

They thought they could sell their condo for at least $550,000, based on other units that had recently sold in the building, then use that money to pay for a chunk of the house, while setting some money aside for repairs and renovations. They could cover the remaining amount with a mortgage.

On November 18, five days after viewing the property, they put in an offer for $865,000, $10,000 under asking, based on the advice of their realtor. The offer was conditional upon a home inspection and the sale of their condo.

The inspection uncovered knob-and-tube wiring in the basement, which the owner agreed to update before Melissa and Paul moved in. Some of the plumbing would need to be replaced, along with adding extra air vents to the second floor to improve the heating and cooling. Based on the estimated cost of repairs, they renegotiated and settled on a price of $840,000. The house would close on February 19.

The outcome: Melissa and Paul are still adjusting to life in Angus. They miss their old condo, especially the custom kitchen, since it had just been renovated, and the kitchen in their new home is dark and dated.

Over the next couple of years, the couple are planning a few renovations, including installing a powder room on the main floor and updating the kitchen, all of which they expect to cost about $85,000. Renovating the attic and basement will cost more, so they’ll save up for five to 10 years before that happens.

Paul and Melissa went from waiting 20 minutes for an elevator in their condo building to not seeing anyone else for an entire day, which is a nice change. They’re enjoying the peace and quiet of their new home. Their condo used to be near a 24-hour bus route, which was noisy. These days, they’ve got deer passing by their property in the morning and birds chirping nearby.

Paul carpools to Vaughan with co-workers most days. Otherwise, Melissa drives him to work en route to her office in Markham.

Melissa loves being close to her parents and sister. She walks her dog to her parents’ house every day so that Oakley can get treats. She’s a five-minute drive to the town centre, where there’s a grocery store, gas station and restaurants.

On their days off, Melissa and Paul are looking forward to exploring Simcoe County and heading back into Toronto to spend time in the city. They see themselves staying in Angus, but they aren’t ruling out the possibility of moving back to Toronto at some point.

Melissa and John continue to joke about the home’s haunted reputation. There’s a section of the basement that wasn’t in the floor plan. “We kind of laughed and said, ‘That’s where the bodies are,’” Melissa says.

Do you have a story about buying or selling a property during the pandemic? We’d love to hear it: realestate@torontolife.com