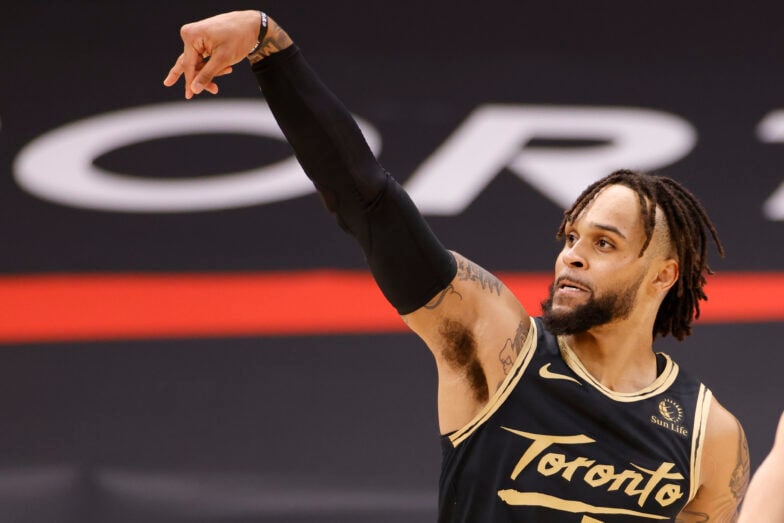 Fresh off a 25-point night, Gary Trent Jr. could be one of the go-to value plays of Saturday’s slate.

See below for a breakdown of value plays for tonight’s slate of games on Fan Duel by FantasyPros.

Bojan Bogdanovic (UTA) $5,700 vs. HOU
One of my favorite players to use recently in NBA DFS has been Bojan Bogdanovic of the Utah Jazz. Bogdanovic has stepped into a more prominent role in the offense, with Donovan Mitchell and Mike Conley dealing with injuries. The veteran forward has hit 5x value at his current price in four out of his last six games. And despite putting up 61.6 FD points at a salary of $5,700 on Friday night versus the Denver Nuggets, FanDuel refuses to raise his price tag against the Houston Rockets.

Gary Trent Jr. (TOR) $5,000 vs. MEM
Speaking of teams who are resting players due to their season being over, the Toronto Raptors are sitting both Kyle Lowry and Fred VanVleet on Saturday. Besides the obvious choice of Pascal Siakam, other members of the Raptors will see an increase in usage sans Lowry and VanVleet. Gary Trent Jr. returned to the lineup on Thursday and recorded 32.1 FD points in 36 minutes of action. When Lowry, VanVleet, and the other sidelined players for Toronto on Saturday are out, Trent sees the second-highest usage percentage (25.4%) on the team, making him well worth the price at $5,000.

Malachi Flynn (TOR) $5,300 vs. MEM
With Lowry and VanVleet being rested by the Raptors, that leaves 45.3% of Toronto’s usage on offense on the bench. That numbers balloons to 64.6% if you add OG Anunoby, who will also be out for the Raptors on Saturday. Along with Siakam and Trent, Malachi Flynn should see increased run on Saturday versus the Memphis Grizzlies. Flynn has averaged 16.6 points, 4.2 rebounds, 5.3 assists, and 1.4 steals whenever Lowry, VanVleet, Anunoby, and Chris Boucher have all been out this season.

Rui Hachimura (WAS) $5,400 at IND
Once again, seeing that the clash between the Wizards and the Pacers is set at 247.5 total points, it will be commonplace to have players from that game. While Russell Westbrook, Bradley Beal, and Domantas Sabonis will have some ownership, a cheaper way to get exposure to the game is to plug in Rui Hachimura at one of your small forward spots. Hachimura isn’t listed on the injury report on Saturday following a two-game absence, and his last appearance came against these same Pacers, who he scored 39.4 FD points against.

Kenyon Martin Jr. (HOU) $6,400 at UTA
It’s been hard to trust certain members of the Rockets this season – especially in recent weeks – as they’ve had an unknown system on how they sit their players. But one member of the roster who has made the most of his increased opportunities recently is Kenyon Martin Jr., who has notched 42.9+ FD points in back-to-back games in less-than-ideal matchups against the 76ers and the Bucks. The rookie forward should continue being a go-to player for a short-handed Houston squad, especially if Christian Wood is ruled out. If Wood is active, and he makes you nervous on Martin, or if Martin is sat, Darius Bazley isn’t an awful contingency plan.

Khem Birch (TOR) $5,800 vs. MEM
Back on Thursday, one of the only picks I correctly predicted was Khem Birch having a productive game versus the Wizards. Birch would explode for 43.3 FD points in 36 minutes in Washington’s victory over Toronto. It has been tough to trust Birch recently, but he draws another plus matchup against the Grizzlies on Saturday. Memphis has surrendered the fourth-most FD points (56.57) to opposing centers this season, and they have been even worse in their past 30 games, giving up 61.96 FD points per game (second-worst in the NBA in that span).

Armoni Brooks (HOU) $4,000 at UTA
The Rockets entered Friday night with only eight players available, including Armoni Brooks. Brooks would be a valuable contributor off Houston’s bench as they took on Milwaukee on the road. Amid the Rockets’ injuries, Brooks would produce 40.6 FD points at a salary of $3,800. While FanDuel raised his price to $4,000 on Saturday, he should still be worth the price if Houston is without Avery Bradley, John Wall, Eric Gordon, and Sterling Brown again. If the Rockets get multiple guys back on Saturday, Ty Jerome and DeAndre’ Bembry are other value options at the shooting guard position.

Theo Maledon (OKC) $4,900 at GSW
The Oklahoma City Thunder have nothing to play for down the final stretch of the season as Sam Presti is itching to begin using the million draft picks he’s stockpiled in recent seasons. Theo Maledon, originally a second-round pick of the Philadelphia 76ers in the 2020 NBA Draft, has been a bright spot for Oklahoma City. The first-year point guard has been operating as the starter in recent games, and he just accrued 36.8 FD points against the Golden State Warriors on Thursday. On the off chance that Maledon is sat on Saturday, Raul Neto and D.J. Augustin are also viable options at point guard.

Sekou Doumbouya (DET) $4,800 at PHI
Given how they’ve continually sat players, it has been tough to gauge who is playing for the Detroit Pistons daily. In recent games, though, Sekou Doumbouya has seen an uptick in minutes. Doumbouya has seen 27+ minutes in the past five games, and he has hit 5x value in his last two appearances. While his upcoming matchup versus the 76ers looks rough on paper, Philadelphia has allowed 49.28 FD points per game to opposing power forwards in their past 15 contests, which is the fifth-worst in the NBA in that span.

Robin Lopez (WAS) $4,300 at IND
It has been well-documented all season just how bad the Pacers have been to opposing centers all season. Indiana gives up a league-worst 58.38 FD points per game to centers, giving the centers of the Wizards a massive boost heading into Saturday. While Washington has started different guys at center throughout the season, Robin Lopez has been their best option recently. Lopez just put up 40.4 FD points on Thursday, and he should see the most minutes among Washington’s centers on Saturday.

Which teams make the most sense for Kyle Lowry? Free agent destinations for the Toronto Raptors guard | NBA.com Canada