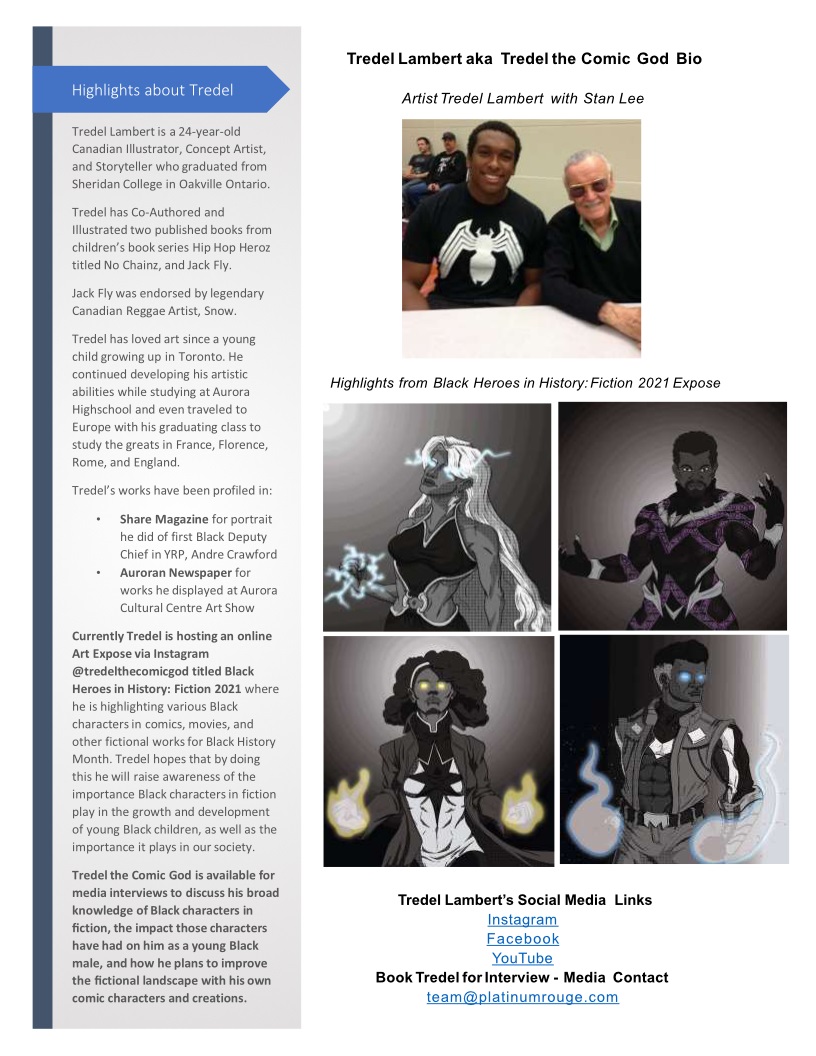 For Immediate Release
February 10, 2021
Toronto Artist Celebrates Black Heroes in Fiction
Artist Tredel Lambert (aka Tredel the Comic God) Highlights Black Heroes in History: Fiction 2021
GTA, Ontario— February 10, 2021 — This month, Toronto Artist Tredel Lambert, aka Tredel the Comic God, has boldly taken on the challenge of highlighting iconic and heroic Black characters in fiction. He hopes that by highlighting new characters each week, he will help share positive images and inspiration that he benefited from and enjoyed while growing up.
“As a child I always loved comics, manga, anime, movies, and other fictional works. I often drew inspiration from fictional characters and appreciated when I saw characters that resembled me portrayed in a positive light” says the 24-year-old Sheridan College graduate.
Today, the Professional Illustrator not only enjoys the works of other comic creators but has embarked on building his own line of characters as well. “Sometimes when life was difficult, as a child I would see the strength of certain heroes and it would help me feel stronger too. I started researching the origin of various superpowers and learnt a lot about life” says Tredel.
By releasing these character profiles, it will also highlight the importance of continuing to give Black heroes and icons prominent roles in fiction. “So many young people live in a fictional world, and we all need to meet characters we can relate to while navigating various fantasy universes” says Tredel the Comic God.
Tredel notes that one thing that stood out to him when creating the series was the lack of female Black fictional characters. “While planning which characters to profile, it became more difficult to find strong female characters to highlight. For this reason, I decided to kick off Black History Month highlighting one of my favorite female legends – Storm from XMen.”
The second character Tredel unveiled was inspired by the late American Actor and Playwright Chadwick Boseman. “I think we can all agree Chadwick did an exceptional job in his role as Black Panther. I based my Black Panther off Chadwick because I find him to be highly inspirational on and off screen” says the young Artist.
Tredel is excited to do his part to extend Black History Month celebrations to the fictional realm and invites you to join him on this journey. You can view Storm, Black Panther, Monica Rambeau, and the rest of the up-coming Black characters in Fiction on Instagram @TredelTheComicGod you can also watch videos about these super characters and learn more about their origin and powers on YouTube by searching for Tredel the Comic God.
Tredel Lambert is a Canadian Artist who was born in Toronto and raised both there and in Aurora Ontario. He has published two books under the children’s series Hip Hop Heroz titled Jack Fly and No Chainz; this series teaches life-lessons to young people. Tredel is also the creator of YouTube series Once Upon an Illustration.
30
For more information, press only:
Jessica Lambert
416-566-9375
Book Media Interviews by emailing
team@platinumrouge.com
For more information on Tredel Lambert or his Black History Month Expose:
Instagram @TredelTheComicGod
Facebook @TredelTheComicGod
YouTube @TredelTheComicGod
Email Tredel Lambert Directly at TredelTheComicGod@gmail.com

Tredel is available for media, bookings, interviews, and commentary

Ladies Get Paid: The Ultimate Guide to Breaking Barriers, Owning Your Worth, and Taking Command of Your Career

Walter Isaacson on The Future of Genetics – Hot Docs at Home